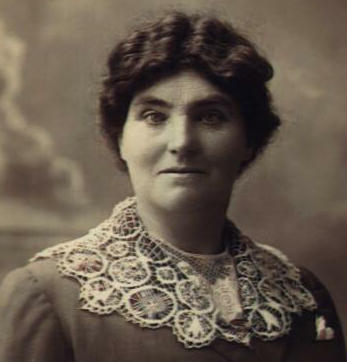 Mary Jane Press was the eldest of seven children born to David Press and Susanna Baker who ran a 700 acre farm at Triangle Creek in the Bathurst district of NSW.

At the age of 23 years she was married at nearby Rockey to 32 year old James Kessey, himself the son of a farmer. She gave birth to their first child, Mary Grace, in the following year with the second, James Harold following two years later. They were known by their second names throughout their lives. Eight more children followed: Beatrice b.1895, Emily Bernadette ("Bern") b.1896, Philomena b.1898, Joseph Aloysius b.1899, John Horace ("Horace") b.1902, Halvar Roy b.1905, Jean Alice Columbia b.1907 and Hilton David b.1909.

Mary Jane and her husband ran the hotel at Mount David, near Rockley. Most of their custom came from the local miners. The eldest two daughters, Grace and Beat, married two sons of the mine manager, Garnet Martin and Dal Martin respectively.

In 1914 there was a scandal involving Mary Jane Kessey and the mine manager, Walter Henry Martin. James Kessey sued his wife for divorce and named Martin as co-respondent. Mary Jane was forced to go live in Sydney for several months to defend the case but the divorce was granted and Martin was ordered to pay James Kessey £500. With their mother gone, the younger children were taken in by their older sisters who were, ironically, married to Walter Martin's sons.

Mary Jane was placed in a very unenviable position. Her ex-husband had thrown her out of their home, she was cut off from her children and she could not have received much support from Walter Martin who had his own family to look after. Fortunately she was a strong person and managed to get through these difficulties somehow.

Four years later, when the First World War ended, the soldiers brought a virulent strain of influenza to Australia. Many people died in a very short period. The NSW town of Orange was very badly affected and James Kessey feared for the safety of his children. He asked the local doctor for advice on how to get away from the 'flu'. The doctor advised him to take his family "to the hottest place you can find". James Kessey decided to move his family to Bourke.

During the crisis, Mary Jane and he ex-husband were reconciled. They boarded the Western Mail train and made it to Dubbo only to be refused room at the inn. At this time of medical crisis, strangers were not welcome. Jim Kessey had to ask the police to intervene in order to obtain overnight shelter for his family.

The family proceeded on the first available train to Bourke. At Byrock, Jim and Mary Jane were quietly married for the second time. The younger children never found out about their parents' divorce.

The family had a comfortable life in Bourke. They soon owned and ran the Oxford hotel, the Palais Royal theatre and several rental houses in the town. Mary Jane's husband became Mayor of Bourke and her children settled into the community. She and her husband bought a large house at 13 Sturt Street where they lived with their married son, Halvar and his wife, Ena (nee Murphy).

Mary Jane and her husband travelled abroad to Ireland via India. While in Ireland, Mary Jane felt that something was wrong at home and urged her husband to return. She was right.

Halvar and Ena's son, Jim, had contracted meningitis, along with 13 other babies in Bourke. Twelve died and the doctor has resigned himself that Jim would suffer the same fate. Mrs Polson, the hospital Matron, suggested that they try a new technique: the intravenous drip. The doctor agreed that it was worth trying and could do no harm. Jim was the only survivor out of the 13 babies that contracted the illness.

Mary Jane was very close to her daughter-in-law, Ena Kessey who lived a block and a half away in Hope Street. Mary Jane was in the habit of hitting a golf ball over to Ena's place and would then follow it for a visit!

She was a woman of strong will and strong opinion. On one occasion, tiring of waiting for her husband to return home, she marched up to the hotel to see if he was there, which he was. She walked into the bar and announced loudly to the barman,

"Danny Ryan, shout for the bar, and Jim Kessey will pay!".

Afterwards, as they walked home, her husband admonished her with,

"Old lady, don't you ever follee me again!".

She replied, "Old man, this is only an introduction!".

On another occasion, her husband had been out late at a card party and Mary Jane was snakey because she didn't go. When her husband eventually arrived home she demanded to know whether they had been served any supper.

"What was on offer?" she asked.

"What did you have?" she asked, still very snorty.

"Well it's a damn wonder you didn't have tea!" came her exasperated retort.

She was also capable of displaying a cutting dry wit. Her quiet response to her husband breaking wind was,

Her husband died in 1944 and is buried in the Bourke cemetery. Mary Jane lived a few more years before dying on 5 March 1951 while visiting her daughter in the Illawarra district. She is buried in Wollongong cemetery.

You can contact me by email at jimflemingnsw AT yahoo DOT com Dot AU
Compiler: James Michael Fleming. I update this website regularly. Check out and Like my Jim's Genie Jottings Facebook page to keep up to date
Site updated on 28 June 2020 at 4:35 PM; 3,146 people
Page created by John Cardinal's GedSite v3.01  |  Based on a design by growldesign