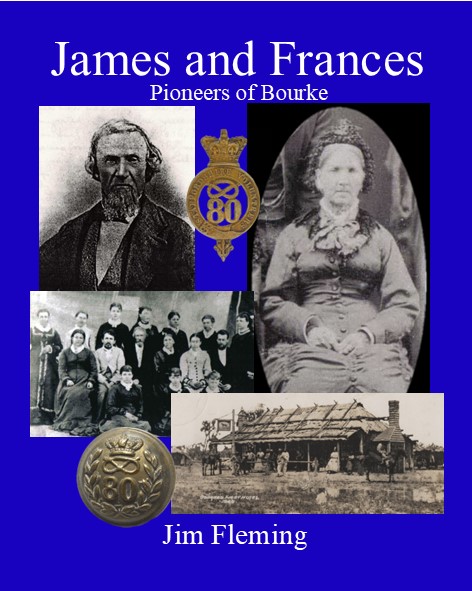 "James and Frances" chronicles the story of the Reed family, pioneers of Bourke. The story spans the old world of Britain and the Mediterranean to the new world of Australia during the 19th century. James Reed and his wife Frances Heazle journeyed to Australia in 1836 with the 80th Regiment of Foot that had originally brought them together, but they stayed behind when the regiment later went to India. After raising a large family in Sydney the middle-aged couple gambled on moving them to the fledgling town of Bourke in 1862, where they were to live out the remainder of their lives.

This new phase of their life started with nothing but their life experience, some meagre savings and a spirited family resourcefulness. The family battled through floods, droughts, heat, dust, bushrangers and family tragedies with resilience and enterprise. They were among the brave pioneers who established a thriving town and provided the opportunity of a better life to their ten children and 91 grandchildren.

The descendants of James and Frances (including the Brennan, Farrell, Gibb, Johnson, Mathews, Maxwell, Murphy, Ralph, Reed, Sullivan and Whye families) honoured them with a prominent memorial stone in Bourke cemetery.

This book would be of particular interest to Reed family descendants of anyone interested in the earliest history of Bourke. It is planned for release during 2023.

Click the button to submit your email address to Jim so that he can advise you when publication is imminent.