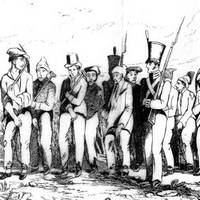 There are several convicts among our ancestors and many more among their relatives, as detailed below. A century ago this was generally considered a source of shame, but attitudes have changed. Nowadays, convict ancestry is embraced as evidence of "true-blue" Australian nationality. The late Lesley Uebel even set up a website where one can "claim a convict" ancestor - click here.

Even more prized by family historians is a claim to descend from a "First Fleeter", an ancestor who arrived in Australia on the first fleet in 1788. Click here to find out more about the Fellowship of First Fleeters.

While I can't claim First Fleet ancestry, I can actually go one better. My 4G-grandmother was an aboriginal woman who belonged to the Wiradjuri Nation. Her son William Isaac Kemp was born on Cooyal Station near Mudgee in 1826. Her name (according to her son's death certificate) was Mary but her fate is unknown. Her son William was raised by his father, Isaac Kemp. William Kemp and his wife Emma Elliott are my 3G-grandparents.

Isaac Kemp was just one of our fourteen convict ancestors. Eleven of these were sentenced to life or 14 years, with the other tree getting seven year sentences. Most served their full sentence or longer (although Thomas Cassey obtained his freedom after just three years). Poor Isaac Kemp served 25 years even though he was never in any further trouble!

But first, here is the list of convict ancestors.

In addition to those direct ancestors, we have a number of other convict relatives (i.e. wives, brothers, uncles, cousins, brothers-in-law and sisters-in-law to my direct ancestors). Euphemia Young was the first wife of Patrick Hanrahan and Ann Young was her sister. Henry, Joseph and John Entwistle were brothers of Betty Entwistle (who was the wife of James Grime the Elder, mother of James Grime the Younger and mother-in-law of Solomon Mather). Martha Jackson was his Henry Entwistle's wife, Ann Yates was his daughter-in-law and Ann Entwistle was his sister-in-law. James and William Entwistle were both sons of Henry and Martha. William Entwistle was transported to Australia on the same ship as his first cousin, James Grime the Younger. George Gibson was a brother to Frances Elliott nee Gibson. Patrick and Mary Tobin were children of Mary Lahy and half-siblings of Martin Bohen.

Mary Lahy and her children Patrick Tobin, Mary Tobin and Martin Bohen were all given life or fourteen year sentences for their part in stealing two sheep. This was the start of a string of bad luck for Mary Tobin that culminated in her brutal murder in December 1856. Her children Martin and Sarah were also stabbed but survived.

The Entwistle family, however, stands out even more than the Lahys, with at least twelve convicts! I am not aware of any other family in Australian convict history that produced a dozen convicts.

The family was based in Edgworth (Lancashire), just one mile from the town of Entwistle which had given their ancestor Robert de Entwistle the family surname six centuries earlier.

John Entwistle (1) and his brother Henry were both charged with possession of forged bank notes in August 1809. John was convicted and sentenced to transportation for fourteen years but Henry's case was no billed (presumably because there was insufficient evidence against him). John arrived in Sydney aboard the Indian in 1810 but was transferred to Hobart aboard the Ruby in 1812. He drowned in the Derwent River in 1814.

Henry's son William Entwistle (2) was sentenced to death at Lancaster in 1811, but this was commuted to transportation. He arrived at Hobart aboard the Indefatigable in 1812, but history doesn't record whether he was ever reunited with his uncle John Entwistle. William's wife (Ann Yates) may have wished to join him because she and his mother (Martha Jackson) were both involved in passing forged money in December 1811. It was not uncommon for convicts' relatives to commit a crime so that they too would be transported, thus rejoining their loved ones. If so, it nearly backfired for William's mother Martha (3) in 1812 because she was initially sentenced to death. Fortunately, the sentence was quickly commuted to transportation. Ann Yates (4) evaded capture until 1813, but eventually pleaded guilty and was also sentenced to 14 years transportation. Martha and Ann both arrived at Sydney aboard the Broxbornebury in 1814. Both were subsequently granted permission to move to Tasmania to be near William, but neither did so. William drowned in the New River at Port Dalrymple in 1817, aged 29 years.

Meanwhile, William's father Henry (5) had re-offended, along with his brother Joseph (6) and their sons and James (7) and William (8). All four were sentenced to seven years transportation in 1813. Joseph died aboard the hulk Captivity in December that year and the other three were all released in 1817, having avoided transportation. But none of them had learned their lesson.

So, that is a total of 12 members of the Entwistle family who were sentenced to transportation between 1809 and 1826. Eight were actually transported; one died aboard a prison hulk; one was released but reoffended and was hanged; and two were eventually released and lived out quiet lives in Edgworth.

In addition, three members of the Thorpe family (related to the Entwistles by marriage) were either transported or hanged. William (also known as Thomas or John) Thorpe of Edgworth Moor - who was executed for highway robbery in October 1813 - was "married into a family of the name of Entwistle who resided in the neighbourhood … (five or six of whom were … transported)" according to the Manchester Mercury of 5 October 1813. Our Entwistle family resided at Edgworth Moor. Both of William Thorpe's parents were transported - James Thorpe on the Surrey 1814 and Ellen Thorpe on the Wanstead in 1814. If we include the three Thorpes, that would bring the extended Entwistle family up to 15 convicts.

I have conducted research to find how the above-mentioned members of the Entwistle family were related to the bushranger Ralph Entwistle (who was from Bolton, near Edgworth). He was hanged at Bathurst for his leadership of the Ribbon Gang which staged the Bathurst rebellion of 1830. Historians have been unable to establish the identity of Ralph's parents with any certainty. While Ralph is a common name amongst the wider Entwistle clan in Lancashire, the name does not appear at all across several recent generations of our branch of the Entwistle family. Therefore, any relationship to Ralph Entwistle would probably be a fairly distant one.