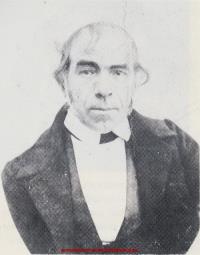 For a detailed biography of Patrick Hanrahan, the Elder, click here.

Patrick Hanrahan, the Elder, and Euphemia Young were married on 15 April 1816 at Christ Church in Castlereagh. C of E||The marriage took place, by law, according to the rites of the Church of England even though both bride and groom were Catholic.6,2 He and Euphemia Young were separated on 8 November 1822 in South Creek, NSW, Australia.7

Patrick Hanrahan, the Elder, was tried on 25 March 1801 in Loughrea. He was convicted and sentenced to life. He was five feet four and a quarter inches tall, had a dark and ruddy complexion, brown hair and hazel eyes.2

Patrick Hanrahan, the Elder, signed a will on 19 April 1857. No 4338||||18 He signed a will on 27 September 1858. ||||The codicil stipulated what would happen to the "big box and contents" and the "small box and contents".18 He died on 30 November 1858 at age ~74 in Mount Pleasant. pulmonary disease||The informant for Patrick's Death Certificate was his step-son, Michael Burke (recorded as Michael Hanrahan).1,18,5 He was buried on 3 December 1858 at Old Black Springs Cemetery in Black Springs.1 He had his estate probated on 13 May 1859. ||estate valued at £400||Patrick's will specified that one sixth of his monies should go to Dennis, John, Patrick, Margaret Donnelly, Mary Ann Kessey and Ann Foran.
John was forgiven his debt of £15 while his other surviving sons who were close to him (Dennis, Patrick, Michael Burke and Phillip) and his son-in-law, James Donnelly, were left a fifth of the horse herd each. (One son, William Henry or James had predeceased him and another son James had always been associated with his first wife, Euphemia Young and her second partner Frederick Morgan.)
His wife, Catherine and unmarried daughters, Bridget and Sarah each recieved one or more specifically named horses (and their increase) and shared a third of his cattle.
Catherine was bequeathed the 30 acre farm, "Hillsbury", and its contents during her lifetime and it was then to go to Bridget. Bridget also got his bed and bedding.
In additon to the horses and cattle mentioned above, Sarah got 50 of the 105 acres at Black Springs (southern side of block) and 30 acres adjoining this land.
The other 55 acres at Black Springs went to Michael Burke. Phillip got 23 acres and one rood at "Swashfield". (While his other sons were not left land, Patrick had left them a sixth of his monies.)18

There is a memorial to Patrick Hanrahan, the Elder, at White Springs Cemetery in Black Springs, NSW. Follow this link for information and images of his memorial.

Click on any citation number above to view details of the source document and, possibly, access an image of the source.
Site published by Jim Fleming. You can email me by clicking the link below - or go to the About page.
Compiler: Jim Fleming.
Site updated on 7 November 2022 at 4:11 PM; 3,719 people
Page created by John Cardinal's GedSite v4.08  |  Based on a design by growldesign