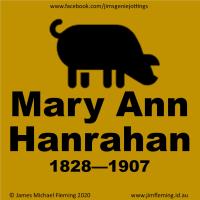 For a detailed biography of Mary Ann Hanrahan click here.

Michael, John, Patrick, and Phillip, 's child, resided with, in Melville, NSW, in November 1828. and worked as a landholder. Catherine Hogan had left her three-month-old daughter (Mary Ann) at Melville and had travelled to Sutton Forest.10 Mary Ann Hanrahan lived at Hillsborough in Black Springs, NSW, in 1881.11 John Kessey and she lived at Hilsbury in Essington, NSW, on 5 April 1891. The residence housed 4 males and three females.12

They was a benficiary of 's will on 19 April 1857. No 4338||||13 Mary Ann Hanrahan witnessed the probate of the estate of Patrick Hanrahan, the Elder, on 13 May 1859. ||estate valued at £400||Patrick's will specified that one sixth of his monies should go to Dennis, John, Patrick, Margaret Donnelly, Mary Ann Kessey and Ann Foran.
John was forgiven his debt of £15 while his other surviving sons who were close to him (Dennis, Patrick, Michael Burke and Phillip) and his son-in-law, James Donnelly, were left a fifth of the horse herd each. (One son, William Henry or James had predeceased him and another son James had always been associated with his first wife, Euphemia Young and her second partner Frederick Morgan.)
His wife, Catherine and unmarried daughters, Bridget and Sarah each recieved one or more specifically named horses (and their increase) and shared a third of his cattle.
Catherine was bequeathed the 30 acre farm, "Hillsbury", and its contents during her lifetime and it was then to go to Bridget. Bridget also got his bed and bedding.
In additon to the horses and cattle mentioned above, Sarah got 50 of the 105 acres at Black Springs (southern side of block) and 30 acres adjoining this land.
The other 55 acres at Black Springs went to Michael Burke. Phillip got 23 acres and one rood at "Swashfield". (While his other sons were not left land, Patrick had left them a sixth of his monies.)13 Died at age at age ~79 on 16 August 1907 in Black Springs, NSW. heart disease mitral regurgitation3,4 She was buried on 18 August 1907 at Roman Catholic Cemetery in Black Springs.3

There is a memorial to Mary Ann Hanrahan at White Springs Cemetery in Black Springs, NSW. Follow this link for information and images of her memorial.