Margaret Scott Ballantyne was born in Scotland, lived in Australia for twenty years before living for nearly thirty in New Zealand.

Her paternal great grandfather (Thomas Ballantyne) was probably a cousin of her maternal great grandfather (Andrew Ballantyne), because they both came from East Kilbride where she was born on 6 January 1855. The family lived in and around Mearns (Renfrewshire) when she was an infant, but later moved north of the River Clyde to Bushyhill (Cambuslang) and, later, Tollcross. Her father was a baker.

When she was twelve years old her mother died suddenly from an infected abscess on her thigh. There is little doubt that the infection resulted from the very poor level of housing and sanitation that prevailed in this area.

Four years later the 16-year-old Margaret was her father's housekeeper at Asforths Land in Old Monkland. When her father died from a stroke two years later, Margaret was suddenly head of the household and de facto mother to her younger siblings. The youngest, Jean, was just 10 years old.

As a 22-year-old, Margaret married Charles Fleming at Tollcross on 28 December 1877. He too was the de facto male head of his household, because his father had abandoned the family many years earlier. He was an iron moulder, as were his brothers. Their mother Elizabeth Fleming (nee Taylor) had managed to hold her family together without the support of her husband.

On the eve of their first wedding anniversary, Margaret and Charles produced a son who was names Charles Taylor Fleming after his father's maternal grandfather. Two years later a second son was born who was named for Christina's father, Thomas Ballantyne Fleming. Four months later Margaret's live-in mother-in-law died. She and her husband Charles were the family elders at just 26 years old.

Later that year their second son fell ill and died of fluid on the brain, probably a secondary infection caused by measles. Their oldest son was also infected, but recovered.

It was probably the deaths of Elizabeth Fleming and Thomas Ballantyne Fleming that finally resolved Margaret and Charles to emigrate to Australia. Eighteen months after their son died they boarded the Eastern Monarch bound for Townsville in Queensland. Charles recorded in his diary:

Margaret was expecting their third son who was born on 13 August as the ship crossed the equator in the Atlantic ocean. Charles recorded the event as follows:

The ship reached Townsville on the 23rd October after a dangerous and eventful voyage. All passengers and crew were quarantined on Magnetic and Ross Islands for three weeks due to a measles epidemic that had broken out on board as the ship sailed up the Australian coast. Fortunately, neither of the couple's sons succumbed to the disease, probably due to immunity built up from young Charles' earlier infection - the one that killed his brother Thomas. 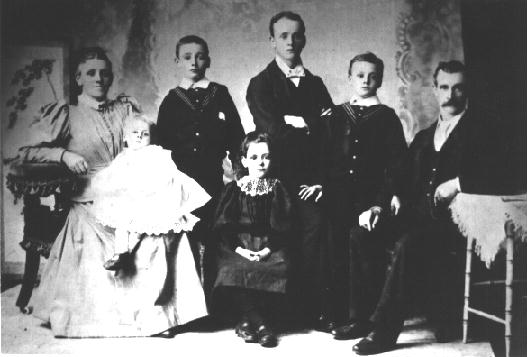 The family soon moved to Sydney where Charles found skilled work in Sir Samuel Mort's iron foundry. During the next few years, Maggie gave birth to three more children: Angus (1887) was named for his uncle who died in the year of his birth, Christina (1888) and Elizabeth (1892) who were named for their maternal and fraternal grandmothers respectively.

All of Charles Fleming's siblings also emigrated to Australia over the next few years, with the exception of his youngest brother Matthew who lived out his life in Glasgow where he became a chemist with his own shop. Charles brother Angus died suddenly from an aneurism in 1887 and is buried in Sydney's Rookwood cemetery.

Family lore holds that Charles was responsible for making the figurehead for the Sydney pilot boat Captain Cook but was incensed that Sir Samuel Mort did not afford him the recognition that was his due. He resigned from his position at the foundry and decided to emigrate to New Zealand. The truth is a little different - see my essay Charles Fleming and the Captain Cook II.

The whole extended family (except for eldest son Charles Taylor Fleming) emigrated to New Zealand in about 1903 and settled in the Thames District, where Charles and Maggie lived for the rest of their lives.

My essay Looks like hopelessness is about Charles Fleming's life.
You can contact me by email at jimflemingnsw AT yahoo DOT com DOT au
Compiler: Jim Fleming. I update this website regularly. Check out and Like my Jim's Genie Jottings page on Facebook to keep abreast of updates
Site updated on 21 June 2022 at 4:22 PM; 3,662 people
Page created by John Cardinal's GedSite v4.06  |  Based on a design by growldesign