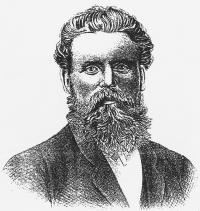 I have corrected the record about the death and burial of James Murphy, my GG-grandfather. Some time ago I had incorrectly concluded that he had died at Bourke NSW on 23 July 1914 and was buried in the local cemetery. I now know that he, in fact, lived for five years longer and is buried in the Catholic Cemetery at Rookwood NSW.

James Murphy was born at Keelnabrack (Kerry, Ireland) in November 1843, a son of John Murphy and Mary Shea. The family arrived in Australia aboard the Talavera in August 1853. He married Prudence Whye nee Reed at Gongolgon, NSW on 18 May 1879 and they produced five children including my G-grandfather, George Charles Reed Murphy.

I have researched his life extensively but, for a long time, was unable to establish when and where he had died. I eventually accepted, like scores of other researchers, that he must be the James Murphy who was buried at Bourke in July 1914. After all, he had lived in the Bourke District since 1870.

Recently I completed a project to bring together all memorial material for each ancestor, including gravestone photographs, funeral cards, obituaries and more. This prompted me to examine the 1914 death certificate in more detail. As I did so, I began to have significant doubts and eventually concluded that this death certificate could not possibly relate to my GG-grandfather. Thus began a research project to find the truth of the matter.

This research has enabled me to correct the record about James Murphy's demise. I have now proved that he lived for five years after his namesake was buried at Bourke in 1914 and that his remains are buried in the Catholic Cemetery at Rookwood, NSW. Read my Research Report "James Murphy's Demise" for details of the evidence that enabled me resolve this question.

Watch this space for the imminent release of nearly sixty new pages of information on memorials to our ancestors.