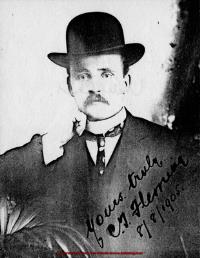 For a detailed biography of Charles Taylor Fleming click here.

For more information about the Fleming surname click here.

Charles Taylor Fleming and Ada Grace Flowerdew were married on 16 May 1900 at 471 Pitt Street in Sydney. They were married according to the rites of the Greek Eastern Orthodox Church1,4

William and Charles visited in Gympie, Qld, Australia, on 24 November 1883. They visited Maggie's Aunt and Uncle for a few days.6

He witnessed 's burial on 17 March 1887 in Rookwood Cemetery, NSW, Australia. Presbyterian Cemetery9,10 Died of on 24 May 1937 in Orange, NSW, Australia, at age at age 58. "carcinoma of the tongue (pharyngeal portion")||4 Charles Taylor Fleming was buried on 25 May 1937 at Presbyterian Cemetery in Orange.4 There was a funeral for Charles Taylor Fleming on 25 May 1937. The Orange Leader newspaper reported: "The esteem in which the late Charles Taylor Fleming was held was eloquently testified by the huge gathering, thoroughly representative of practically all phases of public life, with so many of which he had been intimately associated, at the funeral yesterday afternoon.

"The cortege was several blocks in length, and was preceded by marchers who comprised: Brothers of Court Little John Ancient Order of Foresters, headed by Chief Ranger, Bro J Bashford, and numbering about 50; members of the Orange Bowling and Civic Club, and shire and municipal employees."

"In a short address in the church, Rev. Mills said that a poet had well said that 'man dies, but sorrow never dies'".

"'A man who takes a public part in the life of a community has a great strain upon his nervous system and his strength,' said Mr Mills. 'I have been struck sometimes by the early demise of men in public life. It is the price we pay for the work of God we do in the great economy of the thing.'"

"The service closed with the singing of 'Abide With Me,' which had been requested, and the funeral then took place."

"After the burial service was conducted by the Rev Mills, Bro. E H Allen, P C R, on behalf of the Chief Ranger, Bro. J Bashford, read the funeral oration of the Foresters' Lodge."

There is a memorial to Charles Taylor Fleming at Orange Cemetery in Orange, New South Wales, Australia. Follow this link for information and images of his memorial.

Click on any citation number above to view details of the source document and, possibly, access an image of the source.
Site published by Jim Fleming. You can email me by clicking the link below - or go to the About page.
Compiler: Jim Fleming.
Site updated on 7 November 2022 at 4:11 PM; 3,719 people
Page created by John Cardinal's GedSite v4.08  |  Based on a design by growldesign