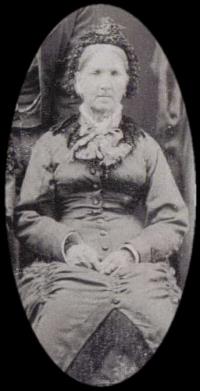 Frances Heazle was born in 1812 in Canterbury. According to her death certificate Frances was the daughter of Sergeant Major Benjamin Heazel and his wife Elizabeth, and was born at Canterbury in 1812. While her baptism record remains elusive, there is no reason to doubt this information.1,2 She witnessed the baptism of James Reed on 5 April 1835 in Manchester, England.3 , as 's mother, presented at baptism on 26 July 1837 in Linden, NSW.4 She witnessed the baptism of Sarah Ann Reed on 26 May 1844 in Sydney, NSW, Australia. Robert Luxford's "Reed Family History" mentions "When Sarah Ann Reed (born 21st March) was baptised on 26th May, 1844. the address was shown as York Street, so it appears that James Reed had set himself up in a shop on the corner just across the way from the Barracks which he had just left. Clearly, if the military life no longer held any appeal, the company of his old colleagues was still attractive (as also their custom)."1,5 Frances Heazle witnessed the baptism of Prudence Reed on 30 August 1846 in Sydney, NSW, Australia. Robert Luxford's "Reed Family History" mentions "another baptismal record - Prudence, August 1846 (born July). (Her father) had become a constable in Kent Street. Previously the babies were baptised in St James or St Philip's church, the two nearest the Barracks. Prudence was baptised at St Andrews which suggests that James was stationed at the watch immediately behind the still incomplete cathedral."1,6 At 's birth, on on 27 November 1862 in Bogan River, NSW, Australia, assisted as a midwife. The original record names the birthplace as "Gralger No. 17 Station on the Bogan" but I have not found any other refrence to this place. It is very likely that this should read "Cowga Station", which comprised blocks 16 and No 17 on the East Bogan. Perhaps the scribe mis-heard the name of the station. According to a list of early Bourke District births published on page 30, volume 7 of the History of Bourke journal, this child was the ninth child of European origin born in the Bourke District. The first child had been born at Fort Bourke two years earlier.7,8

James Reed and Frances Heazle were married on 28 June 1830 at Monkwearmouth in Sunderland. He was a bachelor and she a spinster.1,9,2,10

John and James traveled to in November 1836. "The voyage took 126 days from Cork to Sydney. The surgeon's account indicates that generally it was without incident. He complains of the heat and expresses concern for the health of the convicts in his charge. At his insistence the vessel called at Capetown in November to take on 'fresh beef, mutton and vegetables for the Guard and convicts'. Scurvy was affecting a number of the convicts by this time, but it cleared up very quickly afterwards. In all, three convicts died on the voyage"1 She immigrated on 31 December 1836 to Sydney, NSW, Australia. "The ship arrived in Sydney on 31st December 1836. 'The weather proved remarkably fine and unusually dry' wrote the surgeon. The next day the convicts were marched to the Barracks to be inspected by the Governor (Sir Richard Bourke). The safe arrival of the ship and its assorted company was briefly reported in the Sydney Gazette. The officers and their wives are mentioned by name. James Reed, his wife and children are not mentioned - just '29 rank and file of the 28th, 50th and 80th Regiments, 5 women and 7 children'."1,13 She lived with James Reed in January 1837 in Sydney, NSW, Australia. "Until July, 1837 the Regiment was based at Sydney Barracks. It then moved its headquarters to Windsor. It supplied detachments to a variety of locations to act as guards for convict work gangs."1 She was travel on 31 July 1838 in Windsor, New South Wales, Australian Colonies. "The detachment stationed hitherto at 17 Mile Hollow on the Bathurst Road was relieved by one from the 28th Regiment in July and rejoined Head Quarters."12 She was travel on 6 March 1839 in Illawarra, NSW, Australia. "From Sydney to Illawarra, 1 Sub, 2 Serjts and 30 R&File March 6th."12 James Reed and she lived at Wollongong Stockade in Wollongong, NSW, Australia, on 7 November 1841.14 James Reed and she lived at Nichol Street in Surry Hills, NSW, in 1842.15

Frances Heazle witnessed the death of William John Reed on 7 October 1865 in Bourke, New South Wales, Australia. He had been staying with his grandparents in Bourke for six months. He is the fourth person on record as having drowned at Bourke. Two drowned in 1863 (Empire Newspaper 23/2/1864) and Charles Banks drowned in March 1865 (Empire Newspaper 21/3/1865). The newspaper article must be mistaken about the identity of his parents. It states that his uncle James Reed was his father, but the baptism records clearly shows that his parents were John Reed and Eliza J. This is confirmed by the newspaper article about the later death of his sister, Frances Eliza Reed.21,25,26,27 She died from apoplexy on 5 April 1895 at age ~83 in Bourke. Luxford writes in "Reed Family History", "In their later years, (James and Frances Reed) lived with their daughter Sarah Ann and her husband Michael Brennan in North Bourke. The Brennan's fourth daughter Isabella was said to be the first white child born at North Bourke, in 1869 (although children were baptised in Bourke proper from April 1862). Frances died in April 1895 and James in January 1898, aged 88 and leaving, it was reported, nine surviving children, 'held in high esteem', 86 grandchildren and over 40 great grandchildren."2,28,1,29 She was buried on 7 April 1895 at Bourke Cemetery in Bourke.30 She was buried on 7 April 1895 DETAIL in Bourke.2,31

There is a memorial to Frances Heazle at Bourke Cemetery in Bourke, New South Wales, Australia. Follow this link for information and images of her memorial.