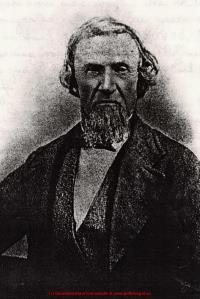 James Reed was born about 1810 in Trentham. ||A letter from the Regimental Secretary of the Staffordshire Regiment (successor to the 80th) states:- "No. 665 James REED enlisted in the 80th Regiment on 11th June, 1827 at the age of 17. The record shows he was a brickmaker and had been born at Trentham in the parish of Stone, Staffordshire"1,2

James Reed and Frances Heazel were married about 1830 in Sunderland.1,2,3

James Reed lived in Liverpool, England, in May 1835. "The 80th Regiment was stationed in the Liverpool area from May, 1835. In September, the Diary records, 'the Regiment received orders to proceed to Chatham for embarkation in Convict Guards for New South Wales'.
"A senior officer wrote later, 'It was reported that the Regiment was to embark for New South Wales, but no one would believe it. We considered ourselves a crack regiment ... so fine a corps could not possible be sent on such a service'.
"Officers could make arrangements to leave the Regiment. Private James Reed had no choice."1 He emigrated on 25 July 1836 at Deptford. convict ship "Earl Grey"||"James Reed and his family embarked on the "Earl Grey" on 25th July, 1836. The military party considted of 5 officers, a sergeant and 29 rank and file, 3 officers' wives, five women and seven children. There were 45 in the crew."
"According to Surgeon Evans, the ship was new and very damp, so several of the guard suffered 'catarrhal affliction'. To dry out the ship, fires were burnt between decks and the barracks and prison 'dry holy stoned with hot sand and lime' - this during the voyage from Deptford to Kingstown, Ireland, to embark the convicts."
"During the passage to Ireland little John Reed took sick with croup. ... The little boy was bled and given aperient powders to make him vomit, to the extent that his 'countenance became pale and sunk' and 'symptoms of sinking of the powers of life were manifest - the powders were discontinued...' - all on the first day! It took him two weeks to recover from this treatment."1 John and James traveled to on 27 August 1836. convict ship "Earl Grey"||"The convicts were embarked in two groups - 91 at Kingstown and 192 at Cork, plus 'five free boys (the sons of convicts in the Colony)'. So the ship sailed on 27th August with 384 persons on board."
"Sentry duty was carried out around the clock and the men on guard were regularly inspected by the officer in charge. Soldiers could be reported and punished for such offences as insolence, quarrelling, dirty weapons, sitting down while on guard, sleeping on guard or talking to the prisoners"1 James Reed immigrated on 31 December 1836 to Sydney, NSW, Australia. convict ship "Earl Grey"||"The ship arrived in Sydney on 31st December 1836. 'The weather proved remarkably fine and unusually dry' wrote the surgeon. The next day the convicts were marched to the Barracks to be inspected by the Governor (Sir Richard Bourke). The safe arrival of the ship and its assorted company was briefly reported in the Sydney Gazette. The officers and their wives are mentioned by name. James Reed, his wife and children are not mentioned - just '29 rank and file of the 28th, 50th and 80th Regiments, 5 women and 7 children'."1,4

James Reed died on 30 January 1898 at North Bourke in Bourke. senile decay||"In their later years, (James and Frances Reed) lived with their daughter Sarah Ann and her husband Michael Brennan in North Bourke. The Brennan's fourth daughter Isabella was said to be the first white child born at North Bourke, in 1869. Frances died in April 1895 and James in January 1898, aged 88 and leaving, it was reported, nine surviving children, 'held in high esteem', 86 grandchildren and over 40 great grandchildren."1,2 He was buried on 31 January 1898 at Bourke cemetery, central eastern side, in Bourke.2